Drug metabolism, toxicity, and interaction profile are major issues in the drug discovery and lead optimization processes. The Cytochromes P450 (CYPs) 2D6 and 2C9 are enzymes involved in the oxidative metabolism of a majority of the marketed drugs. Therefore, the prediction of the binding affinity towards CYP2D6 and CYP2C9 would be beneficial for identifying cytochromes-mediated adverse effects triggered by drugs or chemicals (e.g toxic reactions, drug–drug and food–drug interactions). By identifying the binding mode using pharmacophore pre-alignement and automated flexible docking, and quantifying the binding affinity by multi-dimensional QSAR, we validated a model family of 56 compounds (46 training, 10 test) and 85 (68 training, 17 test) for CYP2D6 and CYP2C9, respectively. The correlation with the experimental data (cross-validated r2 = 0.811 for CYP2D6 and 0.687 for CYP2C9) suggests that our approach is suited for predicting the binding affinity of compounds towards the CYP2D6 and CYP2C9. The models were challenged by Y-scrambling, and by testing an external dataset of binding compounds (15 compounds for CYP2D6 and 40 for CYP2C9). To assess the probability of false-positive predictions, datasets of non-binders (64 compounds for CYP2D6 and 56 for CYP2C9) were tested using the same protocol. The two validated mQSAR models were subsequently added to the VirtualToxLab. 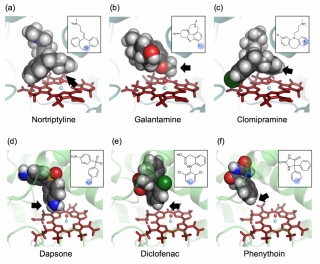 Docking poses as identified by automated, flexilbe docking: nortriptyline, galantamine and clomipramine at CYP2D6 (a-c); dapsone, diclofenac and phenythoin at CYP2C9 (d-f). The enzyme's secondary structure is represented by cartoons, ligands are represented with space filling models, the heme in red sticks, iron and oxygen by with spheres. The primary sites of metabolism from experimental data is indicated by black arrows.